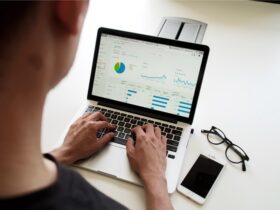 The List of 12 Fast Food Industry Growth Statistics For 2022

Barbecue – who can actually resist it? In Croatia, as well as all other Balkan countries, barbecue is quite a big deal. It is a synonym for gatherings, time for family and friends, hanging out, and enjoying the good company with delicious food and beer or wine. Barbecue is great for any festivity, Sunday lunch, or just enjoying sunny weather. It is, let’s say, a way of being, enjoying, and celebrating!

The most basic meats which Croats make on the barbecue are pork and chicken. Now, this meat can be prepared in various ways – pork steaks and imperial pork chops, while the most popular barbecue chicken meat is the breasts or wings. There is one more particular meat preparation that is a must when it comes to barbecuing – ražnjići. 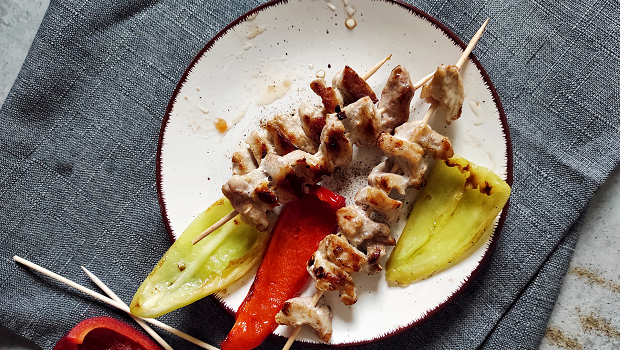 Ražnjići present meat cut into little pieces and then placed on wooden or metal skewers. They can be prepared with pork, chicken, or vegetables, or in a combination of those mentioned ingredients. Today, we are going to prepare classic ražnjići made of pork and with a side dish made of grilled red and green bell peppers. But since the weather isn’t suitable for the barbecue, we’re going to adjust the recipe and prepare ražnjići on a grilled baking pan! Quite a nice alternative way to prepare those during winter, right?

The history of this dish isn’t known but some say that it originated in Persia. There, the term meat skewer (Croatian ražnjići) has been used since the Middle Ages and it presents skewers with small pieces of meat. The dish was consumed with a glass of wine.

Meat-on-a-stick as a cooking method is actually quite old and it has been known since prehistoric times. Then, this was the simples method of roasting fish or meat over the open fire. Before it came to the Balkan, as well as Mediterranean countries, ražnjići were used in Greece, Turkey, and Asia. The most known story is about how Turkish soldiers roasted the meat skewered on the swords, while in Greece, people didn’t roast meat-on-a-stick but thrushes on the skewers. 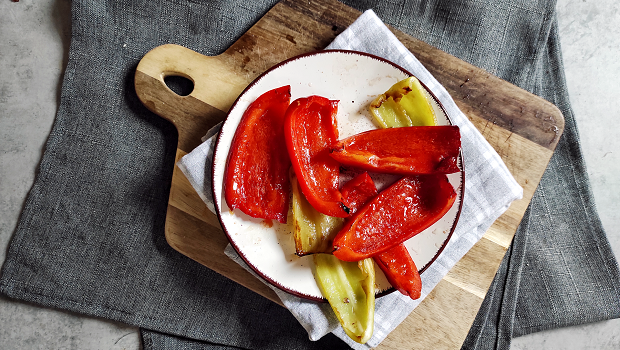 There are a lot of variations of this cooking and roasting method – from using meat and fish to using bell peppers, onions, tomatoes, corns, and more. Probably every country has its own tradition of preparing ražnjići, they just call the dish with a different name and they probably use some other, but equally interesting ingredients.

In Croatia, ražnjići are made, as we already mentioned, from pork, chicken, and vegetables. They are a traditional part of every barbecue, festivity, and gathering.

What To Know & How To Prepare

Ražnjići are really easy to make and prepare, but they do take a bit of time for cutting and placing the meat on skewers. But let’s go from the beginning.

Which meat is the best for making ražnjići? When it comes to the chicken, chicken breasts are really easy to cut and place on skewers, no matter if the skewers are made of wood or metal. The best parts of the pork are steaks (pork shoulder blades).

The meat must be fresh and cool and then, it needs to be cut into small pieces (size really depends on your wishes and preferences). In case you’re using wooden skewers, they need to be placed in water for around 20 minutes (so they don’t burn during the roasting) before putting the meat on them. The next important step in preparing this dish is the marinade. Ražnjići must be placed in the marinade for a couple of hours so all the flavors and aromas are nicely combined. The most basic marinade is made of oil, garlic, salt, black pepper, and a bit of red pepper. Of course, you can add more ingredients if you like. With this dish, everything can easily be adjusted to your wishes and preferences from the meat and skewers to the marinade and side dish. 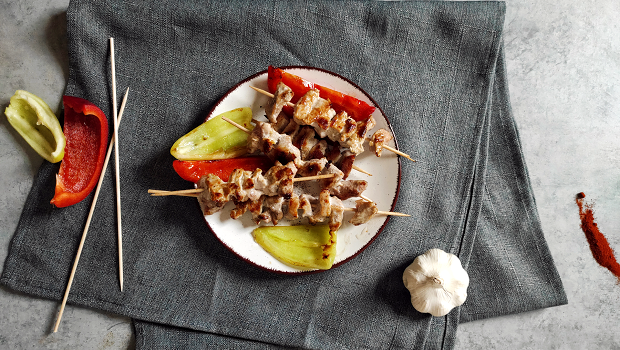 Today, we are preparing classic ražnjići made of pork with bell peppers. All the ingredients will be grilled on the baking pan in the kitchen and trust us – they turn out really delicious and juicy if prepared this way!

Also, you can always cut the peppers and put them on skewers too. You can use other vegetables as well – this may be a classic dish but it is more than suitable for adjusting to your preferences, wishes, and favorite ingredients!

Are you ready to cook? Let’s go!

If you're using wooden skewers, put them in water for 20 minutes. 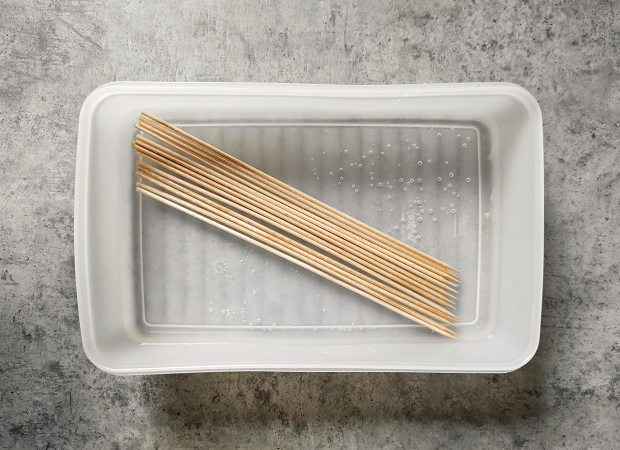 To make a marinade, cut garlic and add it to oil. Add a bit of salt, black pepper, and red pepper. Mix all the ingredients and let them rest.

Cut the meat into smaller or medium-size pieces, depending on your wishes and preferences. 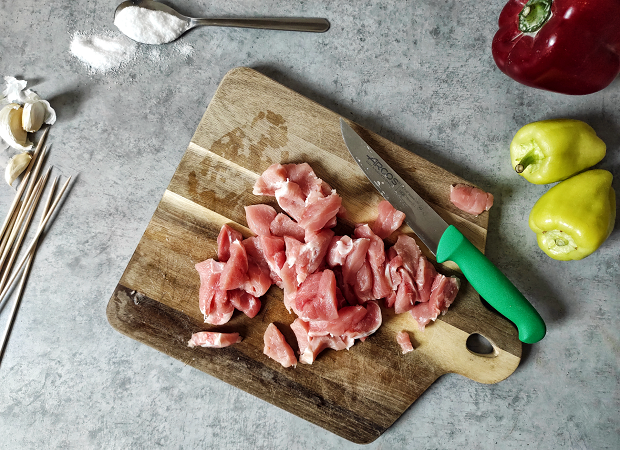 Start placing the meat on skewers. Make sure to leave some space on both ends of the skewer. 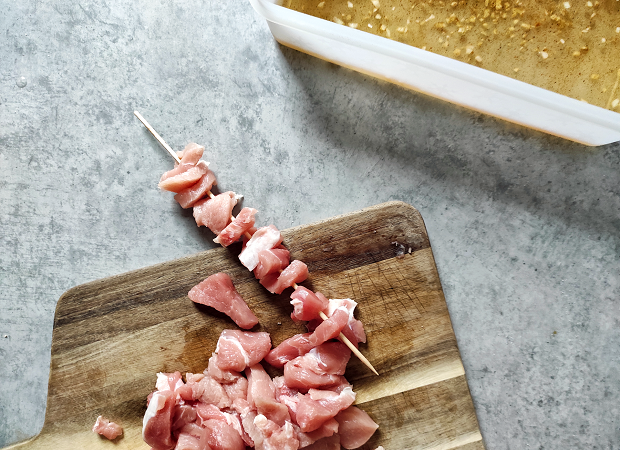 Marinade the meat for at least 2 hours. 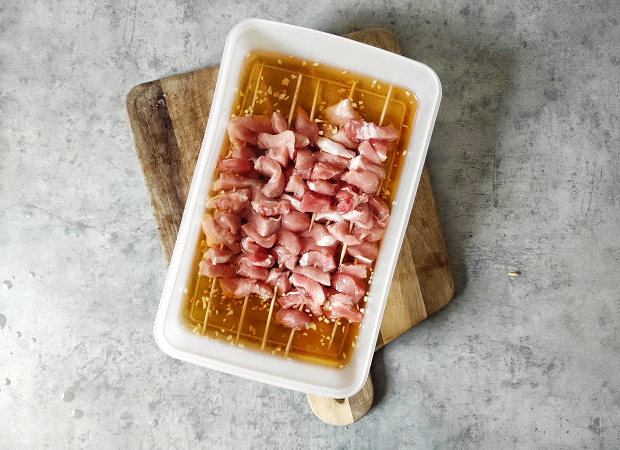 Clean and cut the bell peppers. 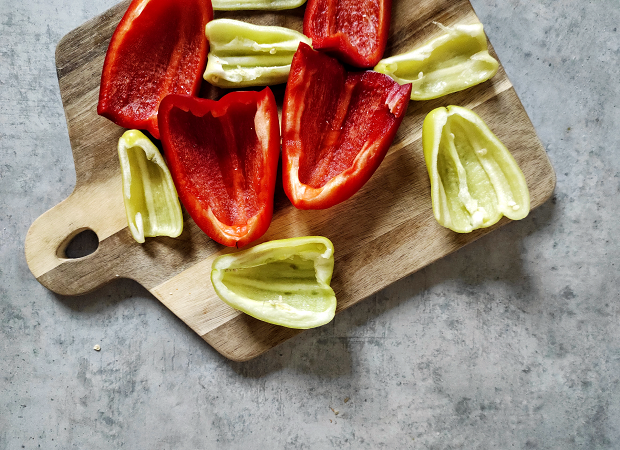 Serve the meat with peppers!

If you're using wooden skewers, put them in water for 20 minutes.

To make a marinade, cut garlic and add it to oil. Add a bit of salt, black pepper, and red pepper. Mix all the ingredients and let them rest.

Cut the meat into smaller or medium-size pieces, depending on your wishes and preferences.

Start placing the meat on skewers. Make sure to leave some space on both ends of the skewer.

Marinade the meat for at least 2 hours.

Clean and cut the bell peppers.

Serve the meat with peppers!

Delicious and juicy – that’s the best way to describe this dish!

The most important thing while making ražnjići is the marinade. Let the meat rest for at least 2 hours before roasting it on the barbecue or baking pan. Everything else can easily be adjusted according to your preferences – you can use chicken meat instead of pork, as well as other vegetables instead of bell peppers. Also, you can combine meat and vegetables on skewers! This dish is really versatile so you can’t go wrong while preparing it! 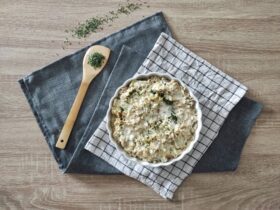 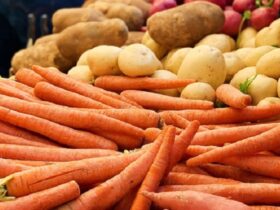 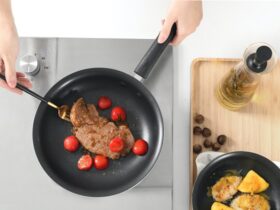 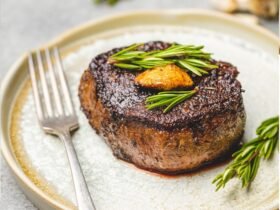 Best Oil For Searing – Make The Most Delicious Steak 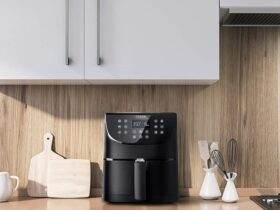 What Size Air Fryer For Family Of 4 To Choose?